Just Put A (Red) Pencil In My Eye 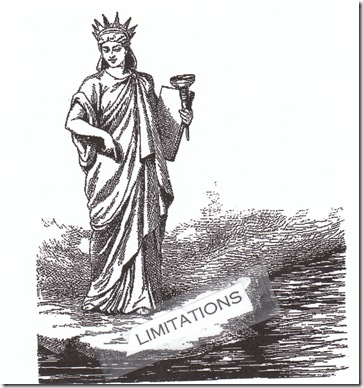 OK, I’ve had it.  You know the newspapers that publish the names of the “Johns” in prostitution cases, with the idea of shaming them into some sort of decent behavior if not outright morality?  I’m going to start a variation of that, except I know it won’t do any good.  I know.  In fact, in a few years, people who still read at all will wonder what in the world I’m talking about.

Lots of people think they read, but they are so distracted and in such a hurry that they miss key words and thus the whole point of what they read.

Lots of people don’t listen, either.  See above for some of the reasons.

Because people* don’t read, don’t comprehend, and don’t listen, they (can’t bring myself to name them) come up with the following uttered or written words:

Isn’t there a statue of limitations? [Uh, no.]

He likes to be on the spotlight. [Must be damn hot after awhile.]

We worked feverously on the project.

He died of smoke insulation.

We need to prevent people to dogfight.

You have a beautiful rhododendrum!

There was a whift of smoke. [This one is not connected with the victim of smoke insulation.]

What was you wanting?  [Where do I begin?]

Here’s one Tara had from a student recently: It was necessary to take gastric measures.  [Don’t think that’ll help.]

*All but two statements or questions came from the mouths or pens of college graduates, some with advanced degrees.

I didn’t start writing down these little gems until a few years ago, after a cocktail party at an artist friend’s house in Mexico.  One of her quasi-boyfriends was an aged Hell’s Angel wannabe, and he sat rather glumly apart from the other people who were gathered on Janice’s veranda, drinking and talking about her art.  Boyfriend just drank quietly for awhile, and then he seemed to catch a word or two of conversation and roused himself long enough to address everyone: “I had an easel under the porch once, but the dogs ran it off.” 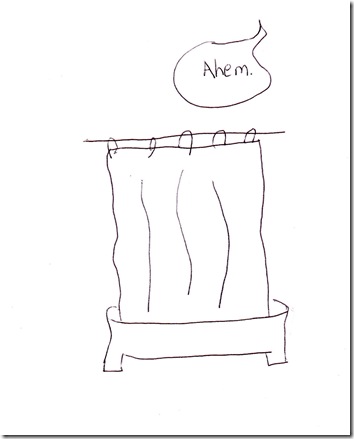 It all started a couple of years ago.  When I was working, I always hopped into the shower first thing, and I was often mulling over some hard part of  life, primarily the fact that I was working.  At least, that’s what I was specifically mulling the first time it happened.  Things had been so difficult at work that I was dreading the start of another week.  Then God said something to me.  The fact that He said anything at all was completely unexpected, never mind the fact that I knew immediately who it was.  It was just a brief sentence or two.  I can’t quote it exactly, but it had to do with setting down a heavy load that I’d been carrying, and it made perfect sense.  It wasn’t something I would have thought of on my own.

Since then, I’ve consciously used the shower as a place to pray, and a place to listen in case God ever wants to say something to me again.  Every once in awhile, He does, but He picks the occasions and they don’t come often.  Anne Lamott says there are three kinds of prayer:  “Thank you thank you thank you,” “Help me help me help me,” and “Wow.”  I say them all in pretty much equal measure.  God never says “You’re welcome,” or “OK, here’s what I’m gonna do for you,” or “Yeah, that was pretty neat, wasn’t it?”  I’ve prayed “help me help me help me” a lot lately, as in “Please give me strength.”  The only sound I could hear in response was the water hitting the bottom of the bathtub, and there was no comfort from the tiled walls.  But I’m here to say, I’ve been given strength.

God only talks to me, it seems, when I least expect it, and no use trying to pretend that I’m not expecting it, because He’s on to that and won’t say a word.   This morning, I was thinking about someone who very recently gave me some unsolicited advice that was so inappropriate and thoughtless it bordered on the bizarre.  I felt slapped with a dead fish, disappointed, hurt, and angry.  I’ve been thinking about it a lot, and I was chewing bitterly on it in the shower.

God suddenly said, “It’s hard to love people sometimes.”  I knew exactly what He was implying, but I’m not up for loving this person again right now.  Actually, I had decided something along the lines of a cold day in Hell.  “I have to go,” I told God.  “I have a dentist appointment.”  He didn’t answer.  He’s done for the moment.  But I’ve been thinking about it all day long.  And I know I haven’t heard the end of it. 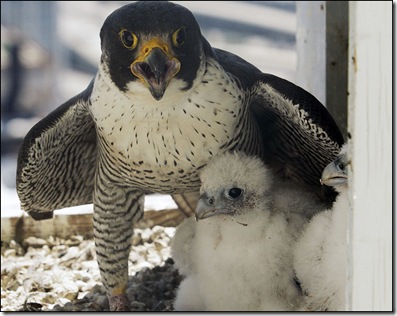 Every year for the past several, I have watched the peregrine falcons who nest on a downtown highrise.  There is a webcam setup there, and I take a look many times a day during nesting season.  It’s the most fascinating thing to watch the mother sitting on her eggs, and then the hatching and the feeding and the growing and the suspenseful leave-taking.  Twenty-five percent of the time, they say, it’s the father keeping watch, but let’s just stay with “mother” right now. Falcons, in case you’ve never had a good look at one, are heart-catch beautiful, and the babies are adorable fluffs of white feathers, sleepy eyes and wobbly legs at first.

I’ve spent extra time watching the past few days.   The best time of the day is late afternoon, when the sun is lighting the nest well enough to see everything clearly, but not glaring on the camera lens and blurring the view.

Yesterday, the mother was watching over three white fluffs, with one egg yet to hatch.  There seemed to be something going on with that egg, though, and the mother was keeping a close eye on it and the chicks already born.  Sometimes she covers them up entirely with her body, but yesterday afternoon she was standing over them in an angelic pose, wings poised and at the ready should the babies need their extra protection.

The mother falcon instinctively knows the right thing to do; the right move to make.  She knows so much more than I do, and yet so much less.  The future is not a concept that she understands or cares about.   She lives only in this moment.  (Non-human creatures are always trying to teach us this.)  Are her newborns safe this moment?  Is the unhatched egg safe and warm?  She may be living the words of an Olive Kitteridge character:  “If you can’t figure out something…don’t watch what you think, watch what you do.”

I watch, like praying, and I try to learn.