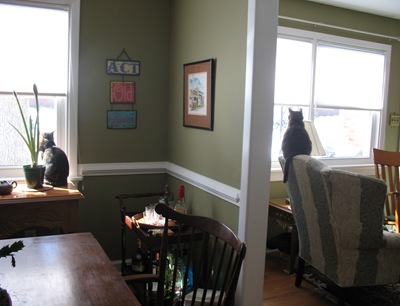 I liked what Conan O’Brien said recently on his last late night show (for awhile).  He directed his remarks particularly “to the younger people,” and he said “Don’t be cynical.  Cynicism is one of my least favorite qualities, and it goes nowhere.  If you work really hard and are kind, wonderful things will happen.”  That may not really be an exact quote, but it’s pretty close.

It’s so hard not to be cynical these days.  Sometimes I swear I will never read the newspaper again and will only watch movies or read books that have guaranteed happy endings.  I feel helpless, more than a little mystified, saddened, and frightened by what I see and hear on every side of the political spectrum.  And yes, I have become cynical about the people LBJ used to call “mah fellow Ahmuricuns.”

We were having lunch with She’s cousins last week.  I told them about what Conan said, we all agreed about how great that was, and not five minutes later I was the first person to make a cynical statement about this nation.  We all winced.  What can we do, the four of us wondered out loud, when our world seems so out of control?  Immediately, we focused on the other thing Conan had said, about being kind.  We’re not younger people, and we’ve already worked really hard, but we could be much kinder, we all agreed.  And we’re not so far gone that we don’t believe in the power of individual kindness.  We can make a positive difference, however small, in our world.  It’s a little something we can hang our hats on.

Today, on my beloved CBS Sunday Morning, Mo Rocca accompanied four teenagers from the Bronx to see a production of Our Town, a play (in which I once had a walk-on part) that has been in steady production for 70 years.  What would these kids from the cynical, fast-paced, often foul-mouthed I-pod/I-phone/Facebook/Twitter generation make of the message in this play, about realizing life while we live it?

The kids said something about taking the time to stop and notice the blue sky.  But is that enough, asked Mo, just to see the blue sky?  One of the young men responded, “The question isn’t whether it’s enough.  The question is, did you look up?”

It started after I checked Facebook this morning.  She was emptying the dishwasher and I joined her in putting things away.  Cheerily, I thought, I began reporting on various recent status updates on Facebook:

Me:  Margo posted a lovely photo from the waterside on Key West.  Phoebe keeps having nightmares about spiders.

She:  Phoebe’s having nightmares about spies?  [This is such a typical hard-of-hearing interchange between two seniors, you wouldn’t believe it.]

Me:  Not spies, SPI-DERS.  That’s one thing I love about Virginia.  We don’t have many bu--

Me:  Well, we do have nasty-looking crickets.  I always thought crickets were cute little guys named Jiminy who hung out on the hearth.

She:  Stop talking about it!  (Hurries from room.)  (Calls to me over shoulder:)  I mean it!  Next thing you know, we’ll have some giant hideous critter stalking us in the hall!

Peace was restored later in the day: 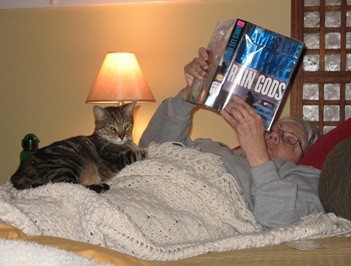 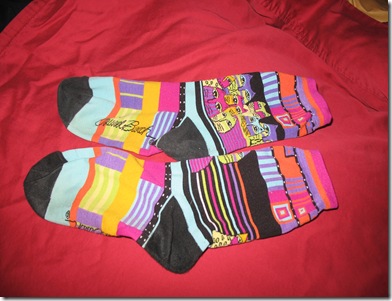 Once upon a time, it was wrong to pronounce the t in often.  Once upon a time, people didn’t say oftentimes.  They just said “often,” like offen.  But that was then.  Oft-ten-times is popular now, as are books on how to be generous, how to be grateful, and how to be happy.  (Hint:  they all go together.  Often.)

Books on how to be organized have always been popular, especially around the New Year, when people often make Resolutions.  Even people like me, who do not make Resolutions, get caught up in the enthusiasm for closet cleaning, dresser drawer purging, and paperwork filing that reasserts itself at the beginning of each new year.

I cleaned out my top dresser drawer the other day.  I probably had 35 or 40 pairs of socks.  When I was a working woman, I prided myself on new, colorful, and somewhat unique socks to wear with my old lady low-heeled shoes.  Now I am retired, and on the rare occasions when I wear any socks at all, they are oftentimes my pair of lucky socks.  I don’t know why they are lucky, but they have lots of  strong colors and people seem to like them.  So I put most of the socks in a bag for the Salvation Army and only kept about 5 pair.  The next day, I had occasion to wear socks and I wore the lucky ones again.

There was also jewelry, some still in gift boxes, that I had forgotten I owned.  I usually stick with the same three or four pairs of earrings, my watch, and one bracelet.  (It’s a lucky bracelet.)  I found a backscratcher.  That might come in handy even though I haven’t used it in 5 or 6 years.  At least two dozen single buttons in their original tiny plastic bags went in the trash.  Ditto washing instructions.  I have no idea to which article of clothing the buttons or instructions belonged.  A pair of glasses without a case went in the donation bag.  I couldn’t see a thing with them on.

My dad’s wallet, flat and worn, was in the drawer.  I took it for safekeeping when he went in for surgery, and then he just never came home again.   He spent three months in and out of the hospital and a nursing home, and then he died.  In the nursing home, he asked me where his wallet was.  “I’m keeping it for you,” I said.  “It’s safe in my top drawer.”  He looked anxious.  “What?” I asked.  “How will they know,” he worried, “who I am?”

I looked through the wallet one last time, cut up the credit and Medicare cards, and the records of his flu shots and blood pressure checks.  I kept his pilot’s license and a much-creased and tattered color photo of a P-38, the plane he flew in World War II.   I put those in a file with his name on it.  Then I put the wallet in the trash.   I don’t need it to remember who he was.

After all that, it was time for a nap.  Some day soon, I’ll get to the other 3 drawers.  Meanwhile, I’ve saved a lot of money by not getting a gym membership this year.  I think being a little more generous and a lot more grateful will make me happier.