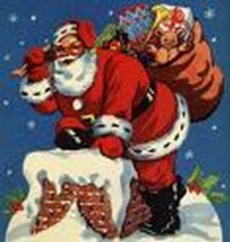 I heard the first Christmas carol of the season on Saturday.  (I don’t get out much; I know they started up right after Halloween.)  It was wafting from the outdoor loudspeakers at the shopping center in our neighborhood, and the second I heard it, I was back in Mexico.  The song was Up On the Housetop:

Why in the world would this particular carol, which has never been a particular favorite anyway, remind me of Mexico?  I’m going to tell you, of course.

We lived in a relatively small Mexican village for four years.   Sheila and I decided to volunteer at the village elementary school as teacher’s helpers.  We would not be helping a Mexican teacher, as it turned out, but another foreigner who was allegedly teaching English to second graders.  Our first day was a disaster.  The “teacher” was power-hungry and manic. She made it clear that we would primarily be passing out scissors, glue, and crayons and otherwise we would stand around keeping our mouths shut.

Her focus on that particular day in December was the Christmas carol Up On The Housetop, which she had on a cassette tape.  Look at the lyrics.  Second graders who know only a few words of English encounter a pun in the first line, and more than likely have never heard of reindeer.   Then ‘ol’” Santa Claus climbs down through the chimney, a structure I’d be willing to bet not one kid had in their home or had ever even seen.

The children could not have had a clue about this song.   The Teacher insisted that we all snap our fingers on the “click, click click,” and she had a couple of the students running back and forth in front of the room with reindeer antlers on.   The kids got the running back and forth part, and almost all of them lined up to do it.  The Teacher was running a few steps here and there in her own crazy way, looking like a combination of Edith Bunker and Adolf Hitler.  I have always wondered what those children told their parents about that lesson, and what the parents made of it.

So much for a 10 year old memory.  I had another culture shock just last week, when the final phase of the infamous kitchen update rolled out.  The floor installer, whom I had not encouraged to chat with me, confided that he was always fascinated by other countries and sometimes considered moving somewhere else in view of “the way things are going here.”

He had recently questioned an Australian he had met about what that country was like.  The Australian said that it was a lot like the United States, except that in Australia they had thrown out a lot of the laws the US had, because they don’t let people get away with things there “like we do here.”  As an example, the floor installer told me gleefully, in Australia they recently “rounded up all the Muslims, gave them public floggings, and deported them.”  “Oh,” he said when he looked at my face, “I guess you don’t agree with that.”

He was disappointed.  I told him that such a thing reminded me of Japanese prison camps during World War II, and the Holocaust.  That I certainly did not agree with punishing people for the way they looked or the way they worshiped.  That I wondered how people who were born in America, as many Muslims are, could be “deported.”  That almost every group you can think of has its radical members.  I don’t know what all I said.  I know I kept my voice calm, and that I tried to remember that this same man had two rescue cats that he loved.  He took what I said pretty calmly as well, perhaps having heard a dim bell somewhere reminding him that bringing up such an inflammatory subject with a customer is not the wisest policy.

We love our new floor.  But I will never be able to forget that the man who installed it is just one example of the ignorance, fear, and misunderstanding that inevitably breeds hatred and injustice and sometimes, even terrorism.