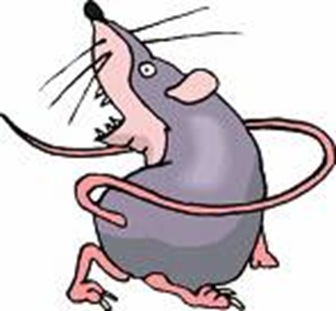 Let’s just pick up where we left off.  Well, no, we’ll stay out of the kitchen.  I mean let’s pick up somewhere in this drafty, creaky crazy-house I call my mind.

I’ve been laughing, more or less to myself, all morning over an email from my dear friend Toni, who has a live rat in her house.  Toni’s cat Joseph has a poor sense of what makes a gift appropriate.  When I say I’ve been laughing, I hasten to add that my thoughts and prayers are with Toni and Gary as they attempt to divest themselves of the gift that is currently residing in the wall behind the appliances in their kitchen.  However, their situation immediately recalled our own Rat Period of 12 or more years ago, which becomes slightly more humorous as the years roll by.

Southern California has fruit trees.  Rats like fruit.  They gambol along the telephone and power lines strung behind suburban houses, which form an efficient Rat Town Trolley with frequent stops at all the best fruit stands.  The most popular time to take the Trolley is just at dusk, when the rats emerge from their living quarters to gather at the trolley stop.  The whole family shops together.  And where are their living quarters, some of the more curious may be asking?  Well, I can only speak for one (vastly extended) rat family.  In their humble opinion, the attic crawlspace in Sharon & Sheila’s house in Long Beach was perfect.  It was a quick scamper from there to the trolley stop.

At first, we thought we were imagining the scratching noises up in the ceiling, particularly in the master bedroom at the back of the house.  Maybe birds on the roof?  Then one afternoon Sheila was taking a nap in the bedroom, with our dog Rosie stretched out next to her.  Suddenly, She was awake for some reason, and just as suddenly, Rosie was staring up at the ceiling.  She’s eyes followed Rosie’s (never ignore an animal who is looking up or behind you), and in mere seconds a perfect circle of ceiling, about the size of a 50 cent piece, dropped on the bed.  It didn’t take long to call an exterminator company.

They couldn’t find a hole in the roof.  They put poison up in the attic crawlspace.  The result was a sudden death wave of expired rats lounging around the yard in various lifelike poses with their eyes open.  I screamed when I found the first one on my way to cut some lovely roses for the living room.  Sheila scoffed rudely at me and swaggered out to do the pickup while I hovered behind a closed window, watching.  When she hauled up next to the rat, she turned a whiter shade of  pale and headed back to the house at a trot.  I had to do the actual pickup and disposal while she crouched behind the curtains.

Then a dead rodent body appeared inside the house, again in a lifelike, lounging position (what’s with that?).  Actually, it was in our bedroom in the middle of the rug.  I screamed urgently, “Bring a lot of newspapers, the shovel, and the bucket!! Hurry up!!  And for God’s sake, don’t look!”  (I stayed in the bedroom near the door to make sure the thing didn’t rise from the dead.)  For once She didn’t respond as usual (“What?”  “What the hell are you talking about?”) but came quickly.  She peered around the door.  “Oh my God,” she croaked.  “Can we just throw the newspapers on top of it and leave it there?”

Skipping over how we got to be on a first-name, home phone number basis with Matt the exterminator (that killed us:  Matt the Rat Guy), one morning before dawn Sheila alerted a still-sleeping Tara and a still-sleeping me that there was a rat in the house.  Alive and on the move.  Tara got up, wedged her leather jacket under her door and went soundly back to sleep.  By the time I stumbled out into the hall, The Town Crier screamed that Rosie had the rat cornered behind the highboy in the guest room.  I dialed Matt.

When Matt arrived, Rosie was still guarding the highboy.  I think she was grateful to turn the crisis over to Matt.  Matt shut the door to the guest room, and what seemed to be a fierce scuffle with some unpleasant high-pitched noises ensued.  Sheila and I clutched each other in the hall.  Tara slept on.

Eventually, Matt emerged from the guestroom, looking somewhat drained and clammy and mumbling something about usually dealing with rats that were already dead.   “You wanna see it?” he asked with shaky pride.  We declined, loudly and in unison.

Sometime that week, the tiny hole in the roof was found and sealed, the attic was checked for any hold-out tenants, and the Rat Period drew to a welcome close.  It’s funny now.