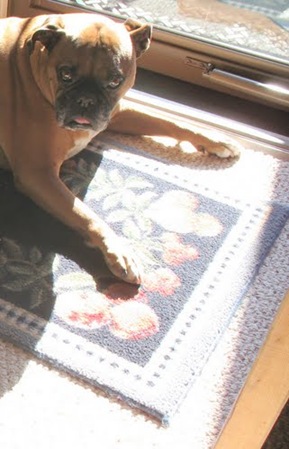 Another year that was somehow both ten seconds long and ten years long. Another year full of life, which means tears, laughter, grief, and joy.

Sheila (mostly) and I decorated for Christmas this afternoon—much less than usual, but still the house looks sweet with little trees here and there, candles, and special ornaments. I am not baking cookies. I did try to make pralines the other day, from my mother’s recipe, but I only saw “1 tablespoon” where “5” were called for, and thus they failed. They may have become a successful vanilla ice cream topping, though. We’ll see. I made a pie with the leftover pecans, and it was the best I’ve ever tasted. We ate the whole thing within a 24 hour period. In this house, it’s called showing restraint.

We brought our sweet brown Boxer’s ashes home from the vet this morning. Pancho died December 7. A month before that, we had noticed that he was having trouble breathing, and it was discovered that he had a big tumor in front of his heart that was putting pressure on his bronchial tubes. We enjoyed all the bittersweet time with him that we were given, but we couldn’t allow him to suffer, and he was getting into serious difficulty the last weekend of his life. He would have been 10 in January. There will never be another like him.

If our hearts are broken, the cats couldn’t care less. They show no signs of missing Pancho. Both of them did act like they’d taken a nut pill the day he died. “Maybe they were celebrating,” our friend Carolyn suggested. Who knows. Anyway, Billy and Miss T should have no doubt that they are loved. If they take us for granted, that’s as it should be.

Since I wrote last year, Tara has undergone treatment for cancer in her lungs and stomach, apparently stemming from the original ovarian cancer diagnosed three years ago. On top of that, she was laid off from the part-time job she did from home, and by that time she was unable to get a teaching position at the University for the summer. Being Tara, she was able to find another job without even a break in paychecks, has taken no or very little sick time from her 4 day/week job, and is due for a major promotion in March. The latter is confidential, which is why I haven’t named her current employer. Don’t tell anyone. Oh, I forgot—it almost seems inconsequential that she was also rear-ended twice this year and had her identity stolen. To say that she’s had a very rough time of it is a ridiculous understatement, and I don’t know the half of it. Her friends, including her Rabbi and his wife, have been incredibly supportive. They love her. Her mothers know why. Her mothers also love them.

As for Sheila and me, what can I say. Same old same old, and I do mean old. We’re so damn old we laugh about it all the time. We joined a gym in April, started doing weightlifting and cardio, and eating much healthier. That lasted until sometime in September. Now we are eating pie and ice cream again and lying around napping and reading books. We have a lot of excuses. We are going to exercise and eat right again. Soon.

There were some very good things about this year. Old friendships deepened. New friends were made. We both feel that our love, our faith, and our hope have been severely tested and survived. No doubt they will be again, and yet again. In the meantime, we are really learning what it means to try to live in the moment. It means much more than we thought. We never realized that doing so could be such a gift.

I always seem to end these Christmas letters with a poem. This year I want to end with some things Sheila said that Pancho taught us: “He made everyone believe they were the only ones he loved in the world, and then he would make the next person feel they were the only one and on and on.  That's his lesson to us, his survivors.  Show your good side, be faithful, wag your tail and never refuse a hug.”

I would add to that: “When you see a patch of sunshine, lie down in it. Heave a big contented sigh. Live right now.”