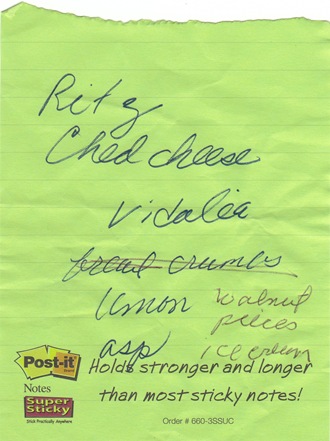 I had scrawled a list of the few items I needed on a green post-it note.  As always, I started in the produce section on the right, and then moved farther and farther to the left around the store.  About halfway around, I consulted my list to see how I was doing.  I read:

Asp?  What the hell??  The image of a dying Cleopatra surfaced in my mind.  What?  What in the world had I meant by “Asp”?  I didn’t need aspirin.  Must be an old post-it note from when I did need aspirin, I thought.  I couldn’t imagine.

I breezed over to the self-service checkout.  Not everyone is smart or clever enough or brave enough to use it, but I am definitely above average, tech-wise.  I confidently scanned my items, bagging them quickly.  When you have produce, the screen asks you to type in the item, and then it shows you some pictures and you select the right item.  Usually it only needs the first two or three letters of the item.   I typed in oni and selected Vidalia sweet, lem and selected lemons, and asp and selected asparagus, which I had thought would go nicely with the chicken piccata.

For a number of years, I was a divorced working mother living from paycheck to paycheck, and not doing the financial thing very well at all.  When Willie Nelson’s “On The Road Again” became a hit in 1980, I started singing it every time I deposited a paycheck in the ATM that would temporarily save us, and I continued singing it through somewhat better times at the end of the workday every Friday until I retired.

I loved the Willie Nelson song, and I also loved books about life on the road, starting with Steinbeck’s Travels With Charley, and including Zen and the Art of Motorcycle Maintenance, Blue Highway, Walk Across America, and the several Bill Bryson books.  But although it was published in 1957 and I was an English major in college in the 60’s, I never read Jack Kerouac’s iconic novel On The Road.  As of today, I still haven’t read it.

This week I was at the library and spotted in the featured/new book section On The Road:  The Original Scroll.  Turns out it is the “legendary first draft—rougher, wilder, and racier than the 1957 edition.”  Why not, I thought, and picked it up.  If I don’t like a book, I never feel obligated to finish it, so no skin off my nose to take something home from the library.  I scanned the scholarly essays that introduce the book.  Scholarly essays seldom convince me that I need to read something.  I flipped to the end and read this last paragraph:

“So in America when the sun goes down  and I sit on the old brokendown river pier watching the long, long skies over New Jersey and sense all the raw land that rolls in one unbelievable huge bulge over to the West Coast, all that road going, all the people dreaming in the immensity of it, and in Iowa I know by now the evening-star must be drooping and shedding her sparkler dims on the prairie, which is just before the coming of complete night that blesses the earth, darkens all rivers, cups the peaks in the west and folds the last and final shore in, and nobody, just nobody knows what’s going to happen to anybody beyond the forlorn rags of growing old, I think of Neal Cassady, I even think of Old Neal Cassady the father we never found, I think of  Neal Cassady, I think of Neal Cassady.”

I cried when I read this, because the writing is so elegant and true, because I was so grateful to be reading Jack Kerouac before my reading time in this life is over, and because it is always such a relief and a blessing when somebody expresses so perfectly what you have thought about passionately and tried your best to say in your own words.

Yes, I went back to the beginning of On The Road:  The Original Scroll (not including the scholarly essays) and am loving every word in it.  Maybe someday I’ll read the novel it became. 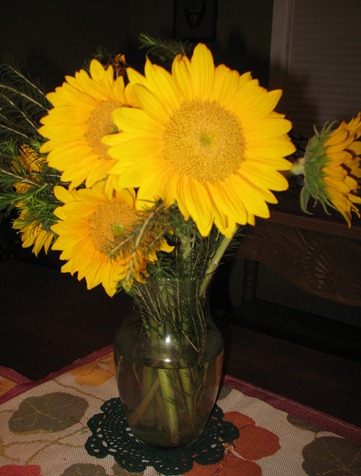 My blog friend Isabelle posed a question on her blog not long ago:  “What were you like when you were nine?”  I loved reading about Isabelle’s nine-year-old self, and I’d like to write about that, too.  But not today.

Today my blog friend Laurie listed three good things she was thinking about, and that sounds like an excellent practice.

My three good things for today are:

1) Iced coffee with half and half in the afternoons.  Summer must be almost here.  Just make it yourself with leftover morning coffee.  No trip to Starbucks necessary.

2) Sunflowers.  Tara sent us a bunch for Mother’s Day, and they are still fine and fresh, the happy things.

3) The book I’m reading right now:  Birdology.  The author is Sy Montgomery, who wrote another book I own and love called The Good Good Pig.  Now mind you, I would never even briefly consider owning a pig, but I laughed and cried over Sy’s pig.  Birdology begins with “The Ladies,” Sy’s hens, and although not particularly desirous of owning birds either, I have been known to fall in love with parrots, owls, eagles and falcons from a safe distance.  I love Sy’s ladies, and am hanging on every word of her search for a cassowary in the wilds of Australia, leeches and all.

4) Gotta make this four things because we just came back from dinner with a friend at a little gem of a new Greek restaurant in the neighborhood.  If you have never had pizza with Greek sausage, pepperoni, salami and freshly made feta, you haven’t been anywhere or done anything.  And if you have eaten such a slice of Heaven and then stopped in at Boyer’s for coconut ice cream, and then you sat down in an old leather booth and savored your scoop(s) with full-on lust, you are one lucky devil indeed.  And you know it.

Happy Friday, everyone.  Shabbat Shalom, too.